Welcome to Greater Union Baptist Church, affectionately referred to as GUBC, where Rev. Vanzelen Brown, Sr. is our pastor. At GUBC, we pride ourselves on serving our Christian family with love, unity, integrity, respect, transparency, accountability, and purpose. We invite all people to come and worship the Lord with us at our illustrious church! Please plan a visit! We are located at 955 E 36th St. North in Tulsa, Oklahoma. We trust that you will feel a warm welcome and that God will speak to your heart through the preaching of His word. 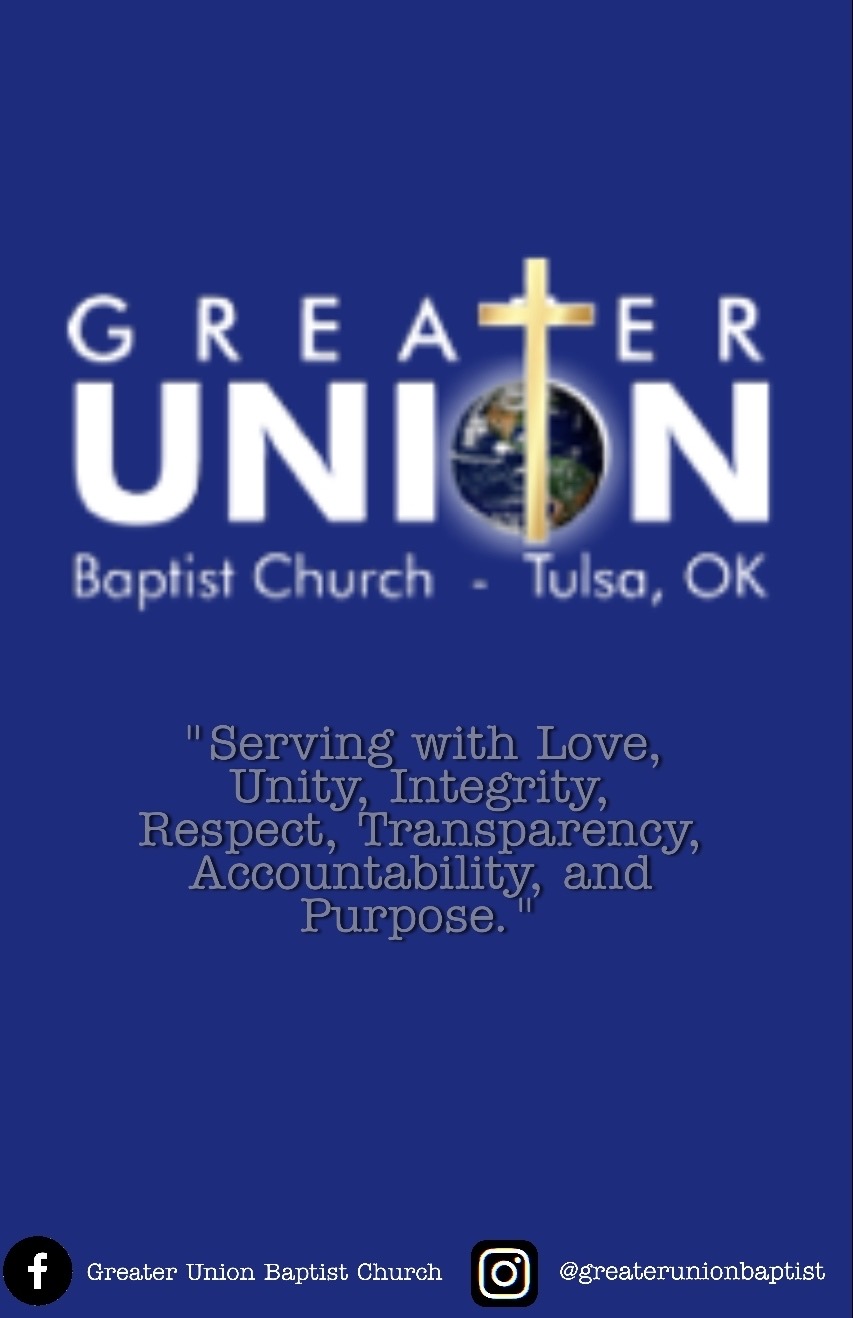 Who is Greater Union? Why Choose Us?

Greater Union Baptist Church was founded in 1916 on Greenwood Avenue in Tulsa, Oklahoma. Over 103 years ago, Rev. W. H. Woods began to preach to a congregation that became what is now known as the Greater Union Family. In the 1920s, our Greenwood location burned down. It was a time of great sadness and loss, however, the Greater Union Family came together and rebuilt what they lost. Greater Union has a history of perseverance. After the rebuilding of the church house, Greater Union grew stronger under the tutelage of Rev. D. C. Cooksey, Sr. For many years, Greater Union thrived on the historic Greenwood Avenue. In the late seventies, Greater Union moved to where it currently resides in North Tulsa. 955 E. 36th St. North has become the home of the fantastic Greater Union Baptist Church. Here at GUBC, we hope to inspire a spirit of perseverance in our members’ hearts. We believe that even in our darkest times, God will see us through. “Blessed is the one who perseveres under trial because, having stood the test, that person will receive the crown of life that the Lord has promised to those who love him” (James 1:12 NIV).

At GUBC, you can now pay your tithes, offering, and building fund online, via your phone or computer, with Givelify or Paypal! Just click here!

At Greater Union, we have a plan of action. This plan is meant to help to continue our church’s renovations. Each member is asked to make a personal pledge beyond their tithe. For more information, click here!


When is Sunday service?

When is Sunday School?

Sunday School takes place every Sunday morning at 9:00 am. We encourage everyone to attend.

Is there a Wednesday night service?

There is no Wednesday night service. However, we hold Prayer Meeting at 6:00 pm and Bible Study at 6:30 every Wednesday. Immediately following Bible Study, dinner is served.

When is service? Do we have Sunday School? When is Prayer Meeting? All your questions answered and more.

What Our Members are Saying

“Each time I visit Greater Union, I’m treated like family and I love it!”
Barry Walton
GUBC was on FIRE this morning! The choir sang with the anointing of the Holy Spirit as they graced us with “The Lord Is Blessing Me.” Then, Pastor Vanzelen Brown gave a powerful message about Submission in the biblical realm. My God showed up and showed out! Thank you, Lord for blessing me exceedingly!
Valencia Hawkins Payne

Use the form below to ask any questions you may have or to inform us of your upcoming visit! We hope to see you soon! God Bless!